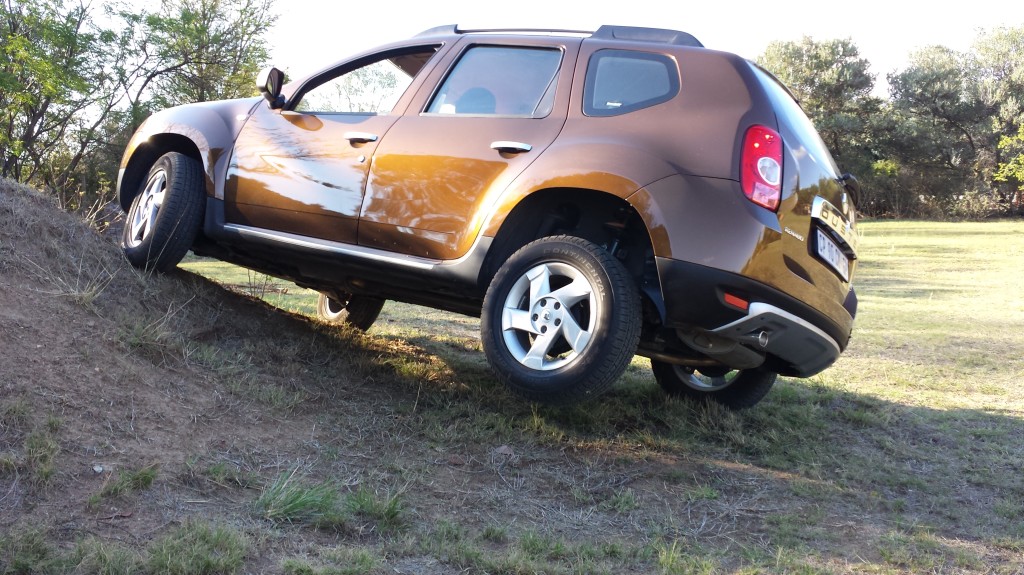 This comparison may be deemed to be unfair in many ways, but what the heck!  We took a Subaru Forester XT, an SUV that makes no claims at being an off roader, and pitted it head to head against the Renault Duster 4×4, in diesel power format, to see whether they could deliver or not.

Bear in mind, the Renault Duster claims to be an off-road capable vehicle, with the ability to change between 2 and 4 wheel drive, and having a diff lock as standard.  It also comes standard with no ‘frilly’ bumpers, and is fitted with all-terrain tyres.  It does, however, lack a low range gear box, but could the diesel power and lightweight be enough to negate the need for it?

The Subaru, on the other hand, features permanent AWD, also without low range ability – but instead has what is termed as “X mode”, reconfiguring the CVT gearbox for low range torque.  It has regular road tyres, low profile wheels, and has lower bumpers which might cause an issue with approach and departure angles.

We put the 2 to the test against one another in a series of tests:

The Renault is cheaper and therefore one can not expect it to have the same sort of suspension quality and refined ride.  The all-terrain tyres though with lower profile rims make the ride more compliant and less jarring.  It is also more prone to slippage when changing gears as the manual gearbox and diesel combination is slightly rough on loose terrain.  The Subaru, despite low profile wheels, wins this task purely for the comfort and ability afforded by the CVT gearbox, which when working with the AWD system, ensures maximum stability.

The Duster, light in weight and small in profile easily sits above loose sand and manages to traverse the terrain at higher speeds and with great ease.  The AWD system works well, and in 3rd gear, the torque of the diesel motor remains steady enough to negate the need to shift gears, creating a smooth, steady ride.  The Subaru, weighing a fair bit more, and riding on less compliant tyres stuggles just a little bit more than the Renault on loose sand. Even with X mode engaged, from standstill it spews sand off the line, and in extreme circumstances, the Renault would have an easier time of things.

While loose sand was easily dealt with by the Duster, it was a different story in wet, muddy terrain, where it managed to slide about a lot more and dig trenches, rather than covering ground.  It never once got stuck, but it did struggle, especially when terrain changed rapidly from dry to muddy to wet grass and so on.  The Renault also had problems with the very short 1st gear, which ran out of puff before 3000 RPM – the resultant gear change cause a loss of traction – cause for concern in muddier terrain.  The Subaru, with its adaptive all-wheel drive, honed in rallying for years, was able to distribute power better.  The X mode torque pulled stronger when it did get a grip, and the smooth gear changes prevented it from being quite literally stuck in the mud.

No, not the twists and turns up Pike’s Peak, the Subaru would definitely win there, but steep inclines, the measure by which many a supposed 4×4 has failed in the past.  Both of these vehicles at hand lacked low-range gearboxes and off-road tyres, but the Duster at least had all-terrain tyres, and the Subaru had X mode.  The Subaru’s smoother CVT automatic gearbox was again its saving grace, as was its petrol powered engine, which meant the CVT could remain in 1st gear with ample torque to face the inclines at hand.  The Duster required a bit of a run-up however, purely to give enough time to shift into second gear, as 1st was incredibly short.  On the uphill stretch, both vehicles managed with equal ability to climb steadily without digging away too much dirt, and both managed to climb high.

The peak or flat top of the rises became a bit of an issue though.  The Subaru, with its longer wheelbase, and the Renault with its lower ground clearance both struggled a little.  Fortunately for the Forester, the suspension was able to stretch further, giving it the edge and allowing it to clear some rises where the Duster got caught.  Point to Subaru – for the brilliant suspension and gearbox.

The Subaru Forester XT is designed to be a road going animal, with a 7.5s 0-100 time, aggressive styling, and the 2-litre turbo’d boxer motor.  Sadly, that does cause some problems.  Namely, the front bumpers, which despite their aggressive styling, do somewhat hamper the ability to descend and dismount steep slopes without ripping a bumper off.  On a side note, we never actually ripped a bumper off, we stopped before that happened.  The hill descent control in X mode is great though, and smoothly navigates rocky descents, until the crucial moment you need to find an easy way out to save your bumper.

The Renault Duster is designed with a purpose in mind, and as such comes with no fancy bumpers or body kits.  The front end is high and well guarded, allowing it to dismount steep slopes with ease and without flinching.  The short 1st gear also made hill descents a breeze – slip it into 1st gear, release the clutch, steer, and dismount – so easy one could do it with their eyes closed if they had some vocal navigation.

This category was probably the most evenly matched, as both contenders passed with flying colours.  Both were able to teeter diagonally with control and smooth weight shifting, and neither lost grip on the terrain during the course of the tests.  Both are top heavy and did at some points feel as if they were about to topple, but neither was ever close to actually falling over.  The Renault’s higher front end allowed it to get into more precarious situations with better control, but the telescopic suspension on the Subaru prevented it from dipping too steeply.  If I were to be picky, the Subaru’s lower front bumpers are a slight issue when first mounting an obstacle, but they hardly ever got in the way throughout a full day of testing.

This test was a draw, neither could be separated – 1 point a piece.

Now at this stage the points are clear, the Subaru wins by 1 – but, if I were to encounter dirt roads, rough terrain, steep inclines and declines, and poor, harsh conditions on a regular basis, I’d leave the Subaru at home – the Renault wins.  The Subaru is superbly accomplished at everything bar steep dismounts, but I wouldn’t subject my half a million Rand car to such conditions no matter how well it handled them.

The Subaru is the ideal vehicle for an active person, travelling to cycling trails and hiking paths, it can negotiate the worst of terrain, as well as the best.  But the Duster is designed to do the dirty work.  It’s a solid, purposeful object with one thing in mind, to conquer the rough terrain, day in and day out.  In this head-to-head battle, the utilitarian Duster takes the prize – by a whisker.