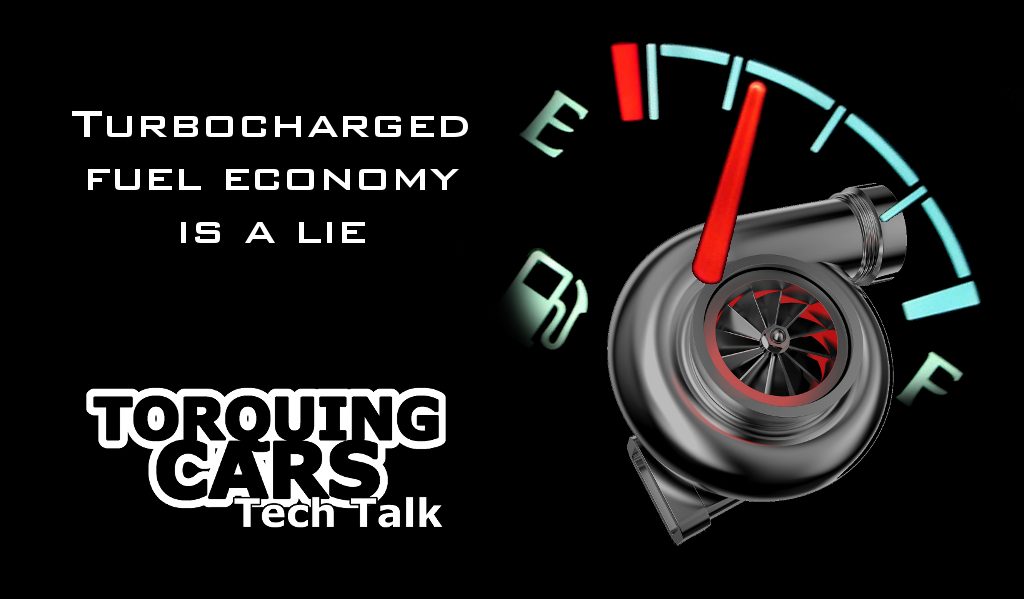 Of late, a few articles have been released stating that manufacturers are going to re-look at the idea of small displacement turbocharged engines.  It seems, despite the downsizing trend, they’ll actually need to start making their engines bigger again.  We’re not talking about getting back the 6208cc V8 from the W204 C63 AMG – but rather 1.0T 3 cylinders may become 1.4T motors instead.  The reason is simple – turbocharged fuel economy is a lie.

It’s a lie you’ve been fed by manufacturers for years, with supporting fuel consumption claims to back them up.  The problem is, those figures aren’t achievable.  Not unless you live in a laboratory and drive your car on a rolling road rather than a real one.

What benefit does that have over something like a Suzuki Swift 1.4 that can routinely achieve 5.1l/100km without needing special attention?

Ford – and any other manufacturer with small displacement, turbocharged engines for that matter – hasn’t been lying to you on purpose, really.  They’ve just been trying to make the most of a flawed system to get the best emissions and economy ratings possible.

The Root of the Problem:

The root of the problem lies in the New European Driving Cycle (NEDC) test – designed to standardise fuel consumption claims and measure emissions.  It’s a vastly flawed test that fails to give real world figures by virtue of failing to emulate real world driving.

You can read the full details and process of the NEDC test here.

But to understand why the NEDC test gives such vastly different figures to reality, we need to understand the basic working of a turbocharged engine’s power delivery…

A Tale of Two Torque Curves:

Turbocharged engines have two different power outputs at any given time – one while the turbo is not being used, and the other when the turbo is boosting.  These are called ‘off-boost’ and ‘on-boost’ respectively.

When a turbocharged engine is off-boost (i.e. minimal throttle inputs, maintaining a steady throttle input etc so as to not start the turbo spooling), the amount of power it can generate is solely based on the base naturally aspirated engine, and likewise the fuel consumption.  In off-boost state, a 1.0-litre engine will not generate much power, but it will also not consume much fuel.  The problem is, to drive around in an ‘off-boost state’, your acceleration would need to be so gentle, you’d never manage to get anywhere on time, or without inducing serious road rage from those behind you.

When the engine is on-boost however, it can generate maximum claimed outputs.  The Ford Fiesta EcoBoost, for example, only generates the full 92kW and 170Nm when it is in an on-boost state.  The turbocharger allows such high outputs to be generated by compressing more air into the combustion chamber than would occur at natural atmospheric pressure.  More air = more combustion = more power.

But, the basics of the combustion cycle state that if you have more oxygen to be burned, you’re going to need more fuel.  When a turbocharged engine is on boost, the car’s engine management system picks up how much air is being forced in, and increases the amount of fuel being supplied, hence higher fuel consumption.

When a turbocharged engine is on-boost, you will never match claimed consumption figures.  End of.  Why?  Because the NEDC cycle only effectively measures the consumption of an off-boost engine, a naturally aspirated engine of X-litres in displacement, using the bare minimum resources to plod along.

Ford knows it, Opel knows it, all manufacturers know it – and now you know it.

Change is coming though, and the NEDC is on its way out, due to be replaced by the Worldwide harmonized Light vehicles Test Procedures (WLTP).  The new test format seeks to more accurately simulate real-world driving conditions, and doesn’t rely on items like fixed shift points etc.

Under the WLTP, we can expect to see low-displacement turbocharged engines consuming and emitting far more than currently claimed, and more than their naturally aspirated counterparts.  They’re likely to be penalised for higher emissions and consumption, which will lead to the U-turn of the downsizing trend.

With that, we may well see a trend of upsizing – where turbocharged 1.2 to 1.4-litre motors may replace the plethora of 1-litre three cylinders we’re seeing at the moment.  Reuters has even go so far as to quote sources that say Renault, GM, and VW are preparing to enlarge or scrap some of their best-selling small engines over the next three years.

I guess there is no replacement for displacement after all.  I bet Mazda is pretty happy to be running economical 2.0-litre engines right about now…