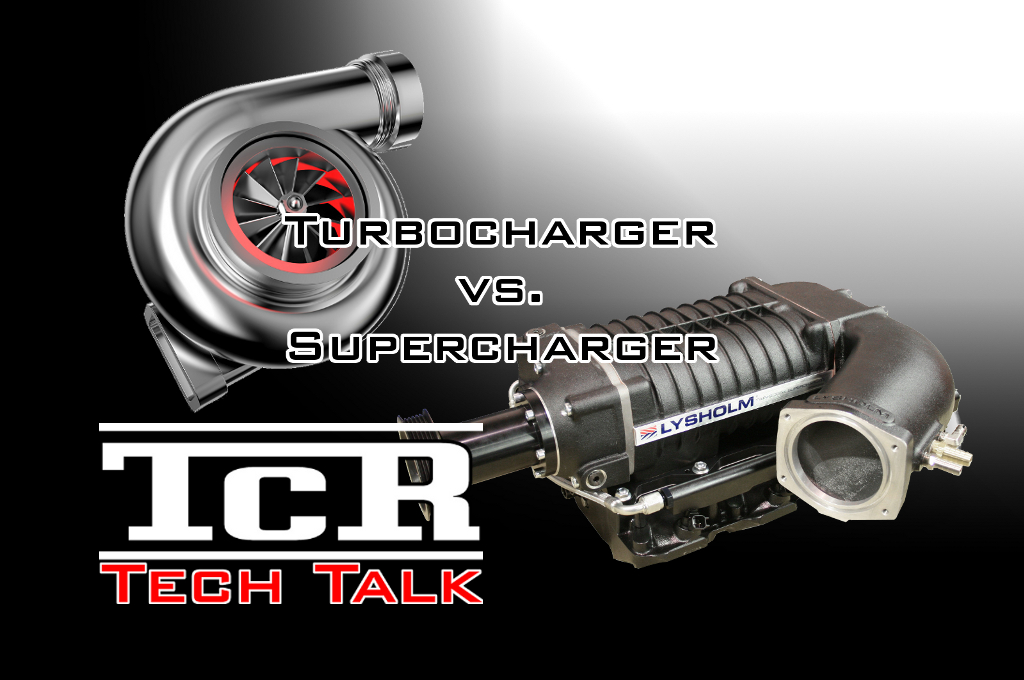 I’m sure you’ve heard either or both of the terms ‘turbocharged’ or ‘supercharged’ before in reference to a car’s engine, but many of you may be unaware of what these terms mean, what the differences are between each system, the pros and cons of each, and which is best.  TCR Tech Talk is on hand to help clear it all up for you.

Both turbocharging and supercharging an engine are means of forced induction – methods of feeding them more air to generate more power.  Both of these systems operate on the principle of compressing air and feeding it into the engine’s combustion chamber at a higher density than would naturally occur.

Turbochargers (originally known as turbosuperchargers) are a method of forced induction that relies on exhaust gases to force-feed the engine.  The exhaust gases spin a turbine in the exhaust system which in turn spools up a turbine and compresses air to be fed into the engine’s intake system.  This system essentially generates ‘free’ power from waste gas emissions.

By utilising ‘free power’, the engine essentially receives a boost in power without any form of energy drain on the rest of the system.  This commonly used system does however suffer from one major drawback; turbo-lag, often followed by a sudden slug of torque.  If you’d like to read more about turbo-lag, you can read our previous Tech-Talk topic, “What is Turbo-lag?”

Superchargers are mechanically driven forced induction systems, powered by the car’s own engine.  The engine drives the turbine in the supercharger by means of a belts, gears, chains, or drive shafts, compressing air and feeding it into the engine’s intake system.  This system is a ‘leech’ system, drawing power in order to generate more power, i.e. placing a mechanical drain on the system as a whole.

The supercharger does also suffer from drawbacks such as being more prone to overheating.  However, the supercharger has one major benefit over turbochargers in the fact that it negates any form of turbo-lag offering steady torque delivery and almost instantaneous throttle response.

Turbocharging vs. Supercharging, which is better?

Both turbocharging and supercharging offer benefits that counteract the drawbacks of the other system, but which is better?  Certain engine applications suit supercharging better, and equally, certain engine setups suit turbocharging better – neither system can be outright declared as a better system.  However, as turbochargers essentially provide ‘free power’, and the excess heat is easier to manage, they have become the more commonly used by manufacturers and are seen as the most effective method of forced induction.

Imagine a system that provided torque from idle, for a minimal mechanical drain, followed by a turbocharged boost of free energy from waste gases.  It exists, and it’s called twincharging, a system most commonly known for its use in the VW Polo GTI’s 1.4 TSI engine.  This type of setup provides the benefits of both systems, but requires additional cooling, may be expensive to manufacture and develop, and also runs the risk of higher maintenance costs should a mechanical failure occur.

What does the future hold for forced induction?

A fairly recently developed system also provides a ‘best of both; solution – electric turbocharging.  In recent years, Subaru, BMW, Audi, and Volvo have been known to experiment with the idea of a turbocharger that operates off exhaust gases, however when the engine’s revs are below the boost threshold an electric motor spools the turbine, essentially as an electric compressor, to provide instant torque, reduce turbo-lag, and increase responsiveness.  Effectively this system fuses the idea of a supercharger and a turbocharger into one mechanism.

This method of electric turbochargers is in all likelihood bound to be the future of turbocharging as a whole, removing the issue of turbo lag completely, yet still providing a ‘free’ power boost to the engine’s final output.