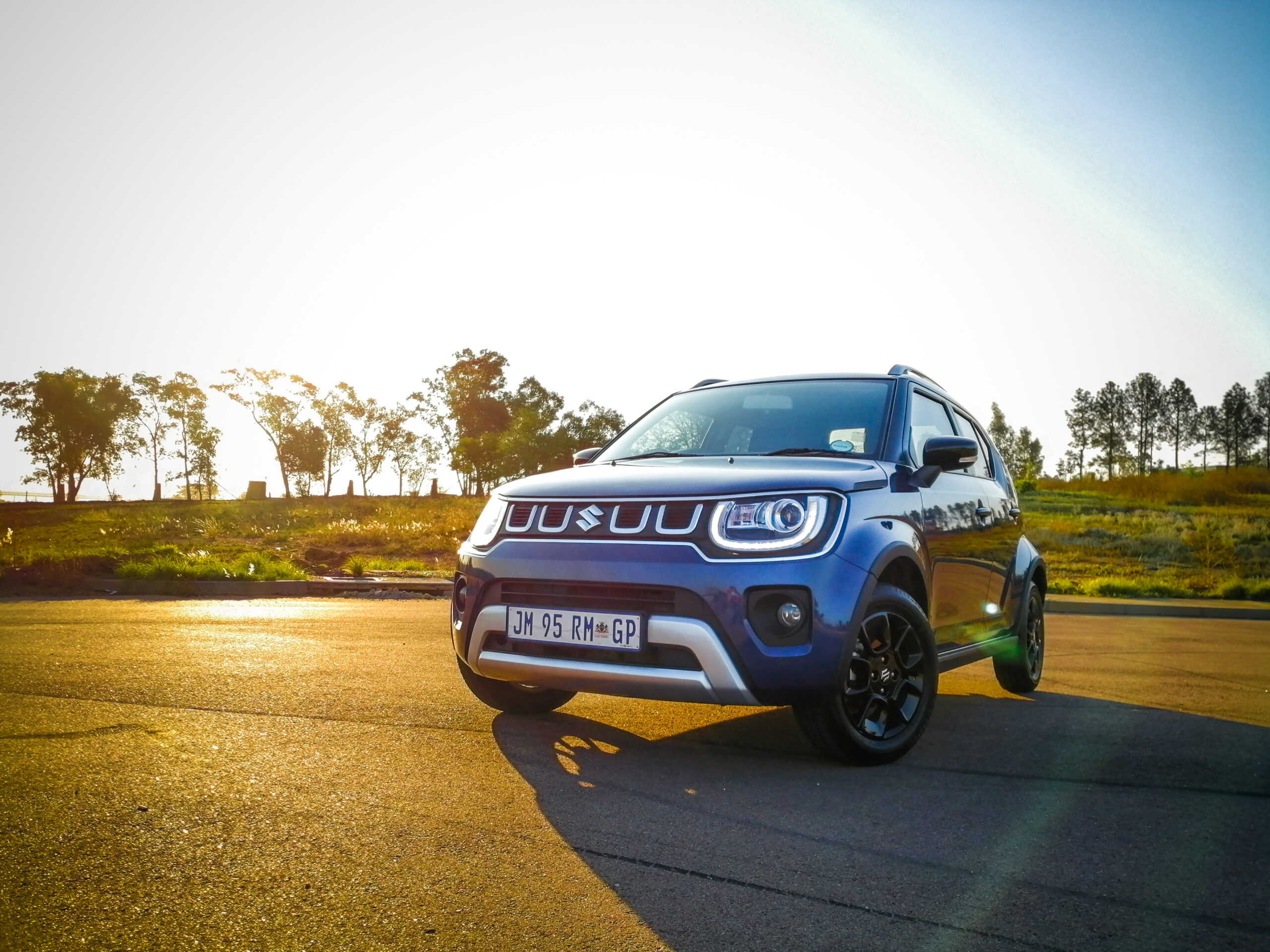 The Ignis name is not a new one for Japanese brand, Suzuki. In fact, the first generation debuted back in 2000 as an almost Kei-sized mini crossover. Suzuki rebooted it for 2016 with similar packaging, and with a budget-friendly price, legendary reliability, and incredibly low running costs, not to mention numerous awards beneath its belt locally, it’s become a firm favourite on South African roads. Suzuki sent us a top-spec 1.2 GLX MT for six days to sample, in a particularly striking shade of Stargaze Blue, and despite a measly 61 kW of power and 113 Nm of torque, we came away impressed.

Characterized by its tall stance, the Ignis is unmistakable on South African roads. The wheels are pushed as far into each corner as possible, while flared wheel arch extensions on the GLX trim house 15-inch alloy wheels in place of the standard steel items. Roof rails are also standard on this trim, but the most important upgrade comes in the form of the LED projector headlights – a first for this segment and a feature that ensures night-time visibility is crisp without blinding oncoming traffic. The styling may not be to everyone’s liking, but quirky design elements such as the triple debossed strakes on the C-pillar give the Ignis a sense of character many budget cars are missing. The broad range of available accessories and a choice of seven paint colours, including the striking Turquoise Blue Pearl, Lucent Orange, and – as worn by our tester – Stargaze Blue, mean the Ignis can be personalised to your taste.

Regardless of trim, the Ignis ships with a 1.2-liter naturally aspirated four-cylinder producing a measly 61 kW and 113 Nm of torque. Two transmissions are available, either a five-speed automated manual or, in the case of our test unit, a five-speed manual. The outputs may not seem all that high, especially at JHB altitude, but the Ignis weighs next to nothing at 850 kg. This means the rev-happy mill makes light work of in-town acceleration (accelerating to 100 km/h takes some effort at 11.6 seconds) and even lighter work of fuel economy, but we’ll get to that in a bit. The engine is happy to rev, and the five-speed manual shifts with a light, slick action that makes the Ignis a doddle to drive.

Tall and narrow, the Ignis will never handle like a Swift Sport, but then again, that’s somewhat the point. This budget commuter is designed to go everywhere the average collegiate would, including odd bits of gravel and grass where the tall ride height comes in handy. It does mean there’s a little excess body roll around corners, but the suspension itself sticks to the road like glue, and the light kerb weight means the skinny tires are seldom pressured beyond their capabilities. The steering is ultra-light, but equally as direct and eager to respond, as are brake inputs. The Ignis is simply easy to drive. It feels remarkably uncomplicated, but it never feels flimsy. Aside from the odd crosswind catching its tall frame out, you’ll seldom realise it’s as narrow and featherlight as the dimensions might suggest.

Suzuki gets one thing right in just about every commuter car it produces – they sip fuel at an astronomically slow rate. Suzuki claims 5.1 l/100km on the manual we had on test, and in a rare turn of events, we managed to achieve the claimed figure without much nursing. On a 32-litre tank, the Ignis is more than capable of driving over 600 km, making it the ultimate cheap date.

Cheap needn’t mean cheap and nasty, and despite the budget price tag associated with the little Iggy, the interior is solidly screwed together and provides enough niceties to get by. The surfaces are hard, but the dual-tone grey and white interior looks attractive, and the body-colour door handles and center console detailing are a nice touch. As for seating, the upright perches mean five occupants are relatively comfortable with ample head and legroom. Only the shoulder-room falters in the rear. On the whole, visibility is good, except for the tiny rearview mirrors and chunky C-pillars, which create sizeable blind spots.

As for practicality, the Ignis has a surprisingly big boot, but the deep nature means that heavy objects could be a little tricky to load. 260 litres are available behind the rear seats, and they fold to avail a total of 469 litres of space for your possessions. There are also a handful of useful cubbies throughout, including sizable door pockets.

Despite a humble asking price, Suzuki gives buyers the choice of two equipment grades. While the GL is relatively scant on niceties, only including electric windows, manual air conditioning, remote central locking, and a pair of front speakers and tweeters with a basic MP3 radio system, the GLX is surprisingly well kitted out. You get a touchscreen setup with Android Auto and Apple CarPlay integration, a rearview camera, rear parking sensors, and automatic climate control, as well as an extra set of speakers in the back. On the whole, it’s a good compilation of kit, but the touchscreen lacks a physical volume knob, which can be frustrating.

The Suzuki Ignis occupies an odd little space beneath the B-segment Vitara as an alternative to the likes of the Kia Picanto X-Line. While that means there’s not much competition, Suzuki has delivered the goods and produced a fine little machine with little to complain about. It’s cheap, drives well, and at one point in my week-long test, I’m pretty sure I watched the fuel gauge climb on its own. Prices start at R188,900 for the GL with a manual and R216,900 for the GLX with the same gearbox, while the AMT adds R17,000 to the GLX’s tag. We’d suggest skipping the base model if you can and opting for the supremely well-equipped GLX, but if your budget only suits the base model, you still won’t be disappointed.