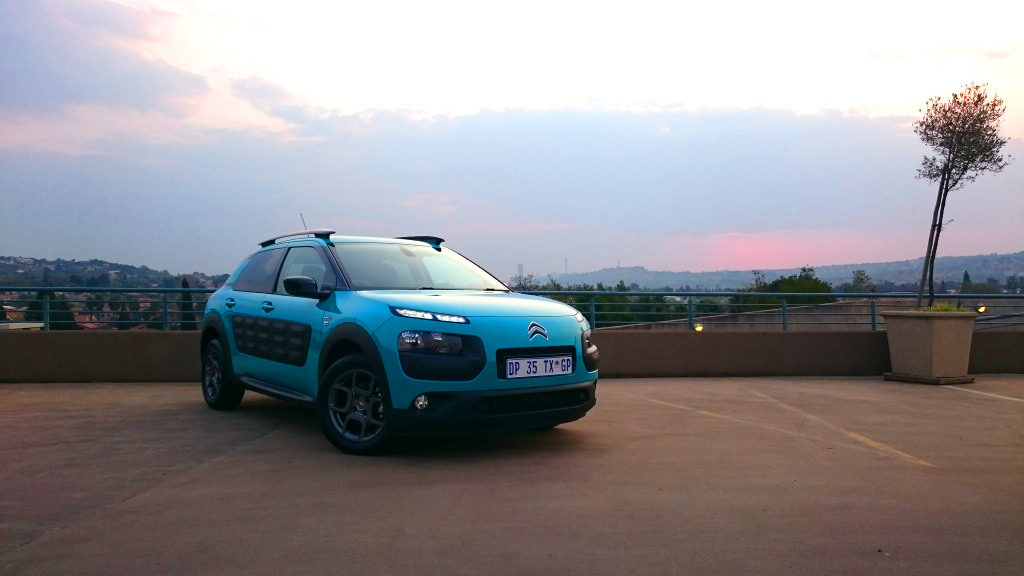 Citroen is playing a dangerous game with their designs lately – they’re focusing so heavily on designing a car around the target audience that they sometimes forget to make sure the car is a decent vehicle first and foremost.  Case in point: the funky little Citroen C1 Airscape we tested earlier this year.  Does their latest funked-up vehicle, the Citroen C4 Cactus fall into the same trap?

For starters the C4 Cactus lies to the public up front – it’s more of a C3 Plus in its size, and actually shares a platform with the DS3 rather than the C4.  As such, it’s a compact crossover measuring a dainty 4157mm long, and only 1729mm wide excluding the door mirrors.

It’s not as small inside as the dimensions might suggest though.  Citroen have paid heed to special design requirements of the targeted buyer, in this case young women with young children, and have designed an interior that maximises on space and gives the appearance of airiness.  They’ve cleverly relocated things like the passenger airbag and mounted it in the roof lining in order to create a flat dash design with an upward-opening cubby hole designed like a suitcase – leather strapping and all.  They’ve also pared away the centre console to maximise lateral leg room and give the impression of spaciousness – it works, and the Cactus feels far larger than it looks from the outside.

But certain elements are hard to hide with packaging alone – the seating position for instance favours shorter drivers, and the steering wheel doesn’t have the reach adjustability a 6-foot bloke like I would require.  That said, it’s not exactly uncomfortable for any occupant, especially those in the rear who have ample leg room, even behind the aforementioned 6-footer in the driver’s seat.

Citroen haven’t just focused on clever internal packaging – which saves as much weight as it does space – but have designed some rather unique aspects for the exterior of the Cactus.  Despite what the name may suggest, the Cactus is soft rather than spiky.  It features soft plastic air-pockets, or ‘airbumps’ as Citroen call them, fitted in panels along the doors and around the light clusters.  These airbumps not only reduce weight – air weighs less than metal after all – but they’re mounted at the perfect height to avoid damage from trolleys, prams, and children swinging doors open without concern for the car next door.

It’s clever, and practical, and in black with high-contrast Blue Lagoon paintwork, the airbumps are as much a design feature as they are purposeful.  The Cactus sticks out like a proverbial sore thumb – it’s striking enough to attract looks from every driver in traffic, and every pedestrian at the mall.  Blacked-out stripes from the rear window through the C-pillar add a floating roof element to the design, while the frameless rear doors – only so because the rear windows are latch type ones to prevent children hanging out the car – with black tinted windows give the funky Cactus a real something ‘different’ to its look.  A rounded nose with LED daytime running lamps gives the Cactus an unorthodox fascia, but one that looks pretty damn cool.

The C4 Cactus is a crossover by classification, but in reality it’s more of a hatchback with a vaguely raised ride height.  As such it’s able to deal with potholes just a little bit easier, but without compromising on overall driving dynamics.

About those driving dynamics… they’re rather fun, really.  With all the weight-shedding measures, both inside and out, the Cactus weighs in at an almost featherweight figure of 1020Kg (as light as a Mazda MX5).  Take that; add in a rather punchy 1.2-litre turbocharged 3-pot engine (81kW @ 5500rpm and 205Nm @ 1500rpm); and you’ve got the makings of something rather brisk.  Sure it’s targeted at mothers of young kids, but the Cactus has plenty of ‘get up and go’, dispatching the 0-100km/h sprint in 9.3 seconds and peaking at 188km/h.

It’s got some genuine overtaking muscle too – thank the light weight for that – and it can really hustle when it needs to.  The engine drives the front wheels via a 5-speed manual gearbox, and while the clutch is a bit too long and the gears have a throw that’s just a bit awkwardly long, the ‘box makes full use of the boost and torque from the thrumming little three-pot.  There is lag present, but it’s not too much of a hindrance, and the turbocharged mill is keen to run right up to the rev-limiter.  I’d tell you where that is exactly, but the Cactus’ digital instrument display doesn’t feature a tachometer – which is only a real issue because the engine does rev so freely.

Being such a lightweight, the Cactus is pretty sprightly too – not just quick.  The steering, although electrically assisted, has some good weight to it and isn’t completely devoid of feel.  It’s not the quickest rack, but it’s eager to turn in and delivers linear responses while giving a good idea of what the front wheels are doing on the road surface.  The suspension setup, being slightly elevated yields a certain element of body-roll – but it’s linear and tapers off gently, providing decent body roll should you wish to chuck the Cactus around a little bit.  Understeer is built into the handling setup for safety, but it takes some true stupidity to really see the cactus come unstuck in any regular scenario.

Speaking of that raised suspension, it’s rather pliant to a degree – rapidly undulating surfaces are a bit uncomfortable and trouble the Cactus’ levels of calm resolve, but occasional bumps are dealt with pleasantly while maintaining decent levels of composure.  The 16-inch alloys, wrapped in 205/55 profile rubber, provide an ample balance between a cushioned and a communicative ride.

However, there is a downside to all the weight-shedding.  The Cactus’ levels of refinement and noise suppression do take a little bit of a knock with thinner layers of sound deadening and insulation.  Cat-eyes thud through the cabin a bit, tyre and wind noise do permeate, and the engine’s thrum can be a bit invasive – particularly at highway speeds where, to my ear anyway, the engine sounds like it sits at around 3500rpm in fifth gear.  In this regard, the Cactus deserves a 6th gear – purely for noise suppression on the freeway, nothing more.

The C4 Cactus is a relatively fuss-free little thing.  It’s cheerful and pleasing to drive, while being fairly simplistic.  In no place is this more evident than the cabin, where the number of buttons and things to fidget with has been kept to a minimum.  The infotainment screen that takes centre stage on the dashboard is a freestanding-look unit (a pet hate of mine in any installation) that controls most of the cars features.  Vehicle settings, media, Bluetooth, navigation, and air-conditioning are all managed from the touch screen display, which also doubles up as a display for the car’s reverse camera.  It’s a clever setup; intuitive and responsive, but the inclusion of the climate settings is more of a frustration than a help as changing these settings requires extended periods of moving your attention away from the road, and to the screen.  It’s a bit frustrating from a safety perspective, that, as there’s more than enough space beneath the screen for Citroen to have equipped 3 small dials for temperature, blower speed, and air distribution.

Small things, but things you learn to live with.  There were a few other quirks too, such as the centre arm rest that impeded easy shifting of gears.  Perhaps shorter drivers sitting further forward would have less trouble, but I found it a bit awkward at times and ended up flipping it away between the seats.

However there are attributes that more than compensate for these slight annoyances.  As mentioned before, the C4 Cactus targets itself primarily at the mothers of young children, and has several aspects catering to such an audience.  In addition to the latch rear windows, the child lock for the rear doors is activated by a button in the front of the Cactus.  The Airbumps cater to any and all bumps and bangs one might encounter when handling kids, and there is more than ample space in the boot for shopping and/or a pram.

While models in the Citroen line-up such as the C1 focus solely on being accessories – prioritising this ahead of being a good vehicle – the C4 Cactus meshes both ideas together wonderfully.  The quirky styling doubles up functionally, and all the quirks have purpose motivating their existence.  Small gripes aside, the C4 Cactus thoroughly impresses in all aspects.

But, it has one downside – due to the rather extreme styling, it’s a hit or miss type of car: you’ll either love it or hate it; there’ll be no in between.  If you happen to fall under the former, then the Cactus will do nothing but impress.