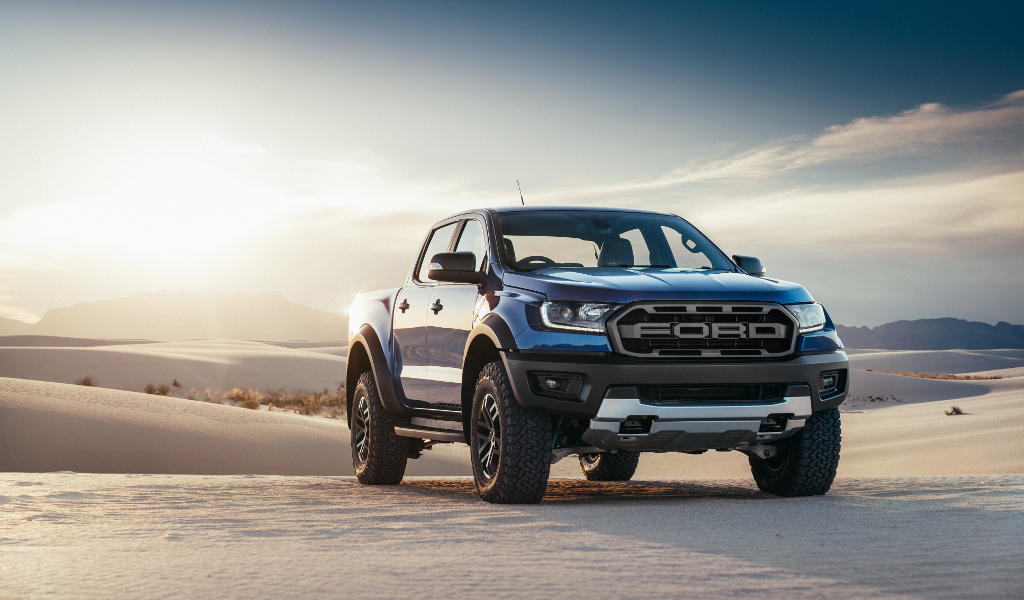 The Raptor nameplate is one that garners much attention.  For Ford, it’s the symbol that a bakkie has been endowed with the best performance the brand has to offer – or at least that’s what it’s meant for the only Raptor previously available until now – the F-150 Raptor.  The F-150 Raptor essentially packaged almost trophy-truck levels of performance and versatility into a performance package that could be utilised on road or off-road track; and central to that was the engine – in the current generation a 3.5-liter twin-turbo V6 from the Ford GT supercar.  Those who were hoping for something similarly insane from the new Ford Ranger Raptor might be a little disappointed then!

Revealed at the launch event in Thailand this afternoon, the Ford Ranger Raptor features a 2.0-liter bi-turbo diesel engine.  Rumours had suggested around 200kW outputs from the Ranger Raptor, but the official figure coming from Ford is that the Ford Ranger Raptor will produce just 157kW and 500Nm of torque.  To put that in perspective, the Volkswagen Amarok V6 TDI puts out 165kW, the Nissan Navara packs 140kW from its own twin-turbo diesel engine, and the upcoming Mercedes-Benz X350d packs a whopping 190kW and 550Nm from its V6 turbo-diesel.  What gives, Ford?

The Ford Ranger Raptor will drive all 4 wheels through an all wheel drive system and a new 10-speed automatic gearbox.  There’s no word on performance figures though – so don’t go getting too excited yet.

However if there’s one place the Ford Ranger Raptor may be able to make up the deficit in power, it should be in the handling department.  Raptor treatment is, after all, more than just a powerful engine in an existing bakkie shell.  The chassis, brakes, and suspension have all been revised heavily in an effort to ensure the Ranger Raptor lives up to the standard set by its American big brother.

The frame of the chassis itself is bespoke to the Ranger Raptor and has been designed and engineered for high speed off-road excursions.  A new coilover rear suspension setup with a Watt’s linkage and solid rear axle has been engineered for the same purpose, and to give greater body control in all situations.  The front end of the chassis has received strengthened protruding shock absorber towers – designed to house new long travel shock absorbers.

Speaking of the shocks, the Ranger Raptor gets race-bred suspension just like the F-150 Raptor.  Fox Racing Shox supply the dampers with 46.6mm pistons for the front and rear.  They’re designed for high performance off-roaders and feature internal bypass technology for on-road comfort, and Position Sensitive Damping (PSD) to provide extra support under higher compression loads.  The dampers are held in place by forged aluminium upper arms and cast aluminium lower arms to assist in greater suspension travel and support.  In terms of steering, an electronically power assisted steering setup is the default.

To handle stopping power, the Ford Ranger Raptor gets twin-piston front callipers clamping down on 332mm ventilated discs. The rear brake discs match the front in size, though a single piston, 54mm calliper does duty here.  The brakes are housed within 17-inch Raptor specific rims, shod with BF Goodrich all terrain tyres measuring 285/70 in profile – tyres that have been developed specifically for the Ford Ranger Raptor.

Aiding on- and off-road excursions, a range of technical features have been included in the Ford Ranger Raptor’s makeup.  Electronic Stability Control, Trailer Sway Control, Hill Start Assist, Hill Descent Control, and Load Adaptive Control are all standard, along with Ford’s Driver Assist technologies.  SYNC 3 handles infotainment, whilst a rear-view camera, and the EZ Lift Tailgate add an extra layer of convenience.

But what will easily be one of the biggest bones of contention – in addition to the underpowered drivetrain – is the Ford Ranger Raptor’s design.  South Africans have been equipping standard Rangers with Raptor-inspired body kits for quite some time now, and the Ranger Raptor looks surprisingly sedated in comparison.  The block letter Ford logo appears at the front surrounded by a chunky grille surround.  There are flared wheel arches with black surrounds and ventilation to the front arches too.  Though it does look beefy with a muscular stance, you’ll be hard pressed separating it from some of the Raptor-kitted Rangers on South African roads.

The interior thankfully sets itself apart with sportier intentions – including the Raptor branded seats, Ford performance steering wheel, and blue stitching throughout the cabin.

There’s no word yet on when the Ford Ranger Raptor will be reaching South Africa, though it has already been confirmed that South Africa will be one of the production centres for the new performance pick-up from Ford.