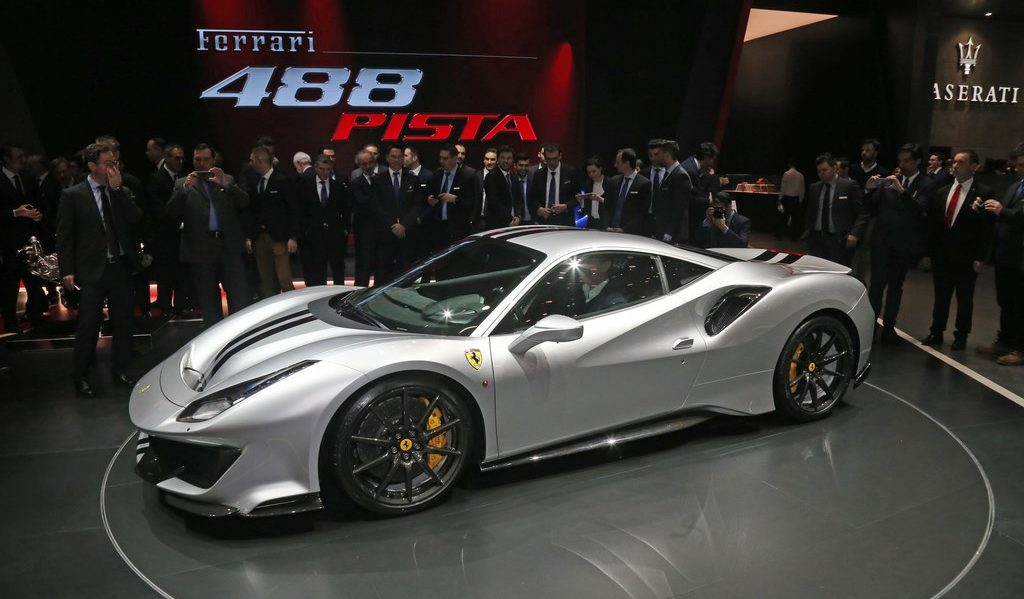 With every generation of mid-engined V8 super-Ferrari, we get another super version for track enthusiasts and/or collectors alike.  We’ve seen the F430 Scuderia, the 458 Speciale, and now we have this, the Ferrari 488 Pista.  The 488 Pista is the latest in a series of oddly named Ferraris, like the LaFerrari, and in this case, Pista translates from Italian to mean ‘Track’ – as in Pista Di Fiorano – Ferrari’s test track in Fiorano.

Based on the turbocharged 488 GTB, the 488 Pista follows a similar recipe to special edition V8s of the past, reducing weight and cranking up the power, along with a smattering of other upgrades to ensure it lives up to the name.  In the case of the 488 Pista, it benefits from upgrades and development from the 488 Challenge and 488 GTE racers.

The 488 Pista makes use of the same 3.9-litre twin-turbo V8 engine as the 488, but in this setting it has been upgraded to develop final outputs of 530kW (720PS) at 8000rpm and 770Nm at 3000rpm in 7th gear.  Why 7th gear?  Well remember that Ferrari limits torque in each gear in order to help give their turbocharged motors more of the ‘build-up’ feel of a naturally aspirated motor.  Amongst the upgrades made to the engine, lightweight titanium con-rods and carbon-fibre intake plenums have been added, along with specific valves and springs, together with a new cam profile.  The 488 Pista also features an inverted radiator cooling system derived from the 488 Challenge

Providing a unique soundtrack to the Ferrari 488 Pista’s driving experience, Ferrari has equipped the Pista with a new Inconel exhaust system, and an optimised bypass system.

But the 488 Pista is more than merely an exercise in reduced engine weight and additional engine power.  A total weight loss of 90kg over the 488 GTB contributes towards the performance – of which 18kg is shed from the engine itself.  Other weight reductions have been focused around key areas of the car, such as reducing unsprung mass and reducing the weight of components furthest away from the 488 Pista’s centre of gravity.

To that end, items such as the the engine cover have been manufactured out of carbon fibre, as have the front and rear bumpers and the rear spoiler.  An optional extra, available for the first time on a Ferrari, is a 20-inch single-piece carbon fibre wheel – around 40% lighter than the standard alloy on the 488 GTB.

The carbon fibre bodywork has also been tweaked to improve the overall aerodynamics of the 488 Pista.  Air intakes have been repositioned from the flanks to the rear spoiler of the 488 Pista, the shape of which generates higher air pressures that result in not only better engine air flow, but higher levels of downforce.

But to ensure the 488 Pista’s downforce levels are at the right level for the desired performance, the front end has been redesigned substantially.  The front bumper and bonnet in particular have been redesigned to create a large front spoiler dubbed as a Formula 1-derived S-Duct.  This design improves downforce over the front axle, improving front end grip at speed.  The S-Duct design represents 18% of the total claimed downforce increase on the 488 Pista – which possesses a 25% increase over the 488 GTB upon which it’s based.

Ferrari has re-engineered several key systems to improve the 488 Pista’s handling and driving dynamics too.  The latest generation of Side Slip Control (SSC 6.) has been equipped, as well as the upgrade of the braking system.  The new braking system features another first for a Ferrari road car – the Ferrari Dynamic Enhancer (FDE) utilises all manner of sensors including slip angle sensors and applies individual brake callipers in micro-incremental degrees to help control the chassis at and beyond the limits of adhesion.  10% stiffer springs also aid overall handling.

Lastly, the interior has also been extensively revised to reduce weight and add a race-inspired feel to the cockpit.  Extensive use of carbon fibre and Alcantara is paired with contrast stitching.  The passenger side glove compartment has also been removed so as to slim the dashboard visually.

Expect the Ferrari 488 Pista to launch in South Africa in 2019, with numbers limited to a few select clients.