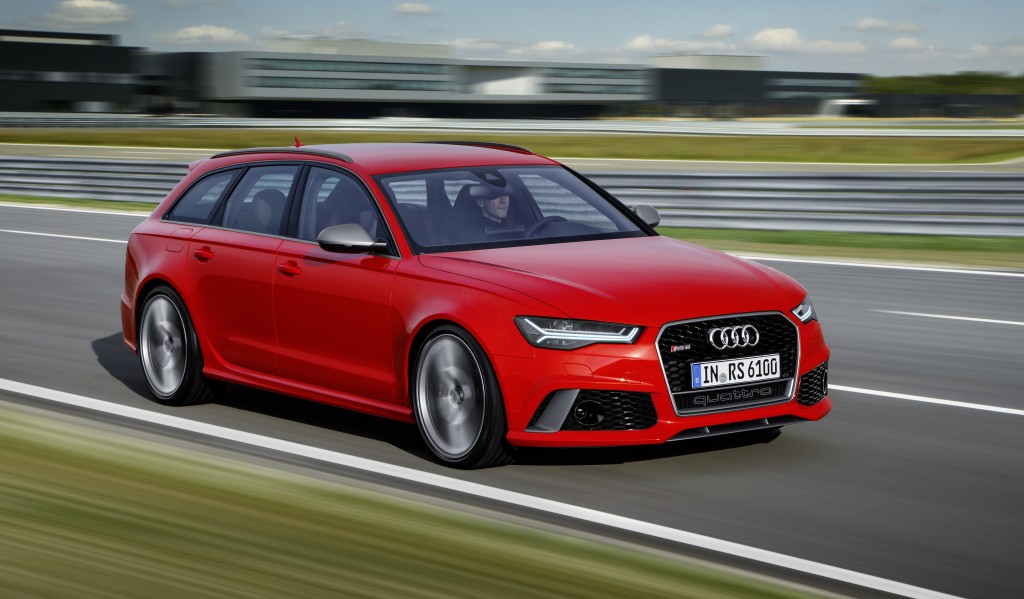 Volkswagen may be in deep trouble, but at Audi’s Quattro GmbH headquarters in Ingolstadt it’s business as usual as they’ve just dropped a performance bomb on the world that must have their engineers displaying a most un-Germanic degree of emotional laughter at the expense of BMW and Mercedes-Benz.  Say hello to the 445kW, 750Nm RS6 and RS7 Performance.

You read that right, 445kW and 750Nm.  The ‘performance’ moniker is new, effectively acting as the same denomination as what, on other models, would be touted as a ‘plus’ edition – but the product does what it says on the box.  The standard RS6 and RS7 are hardly slow, with 412kW and 700Nm combining with quattro permanent all-wheel drive to yield a tasty 0-100km/h time of 3.9 seconds before powering on to reach a limited top speed of 250km/h.  But with an additional 33kW and a 50Nm overboost function, the performance editions are set to be nothing short of extraordinary.

So, what’s different?  Well the RS6 and RS7 performance models are still powered by the same 4-litre twin-turbo V8 found in the standard versions, but with a few tweaks to achieve the more potent figures.  The turbochargers’ geometry has been revised, as well as the exhaust valves.  The engine management system has been tweaked, boost pressures increased, and the redline has been lifted by 200rpm to 6800.  Peak torque arrives between 1750- and 5500rpm and peak power, all 445kW of it arrives between 6100 and 6800rpm.  That 50Nm overboost function occurs under full throttle load in ‘dynamic’ mode, between 2500- and 5500rpm.  The boost gauge also glows red when in overboost – in case the torque ripping your skin off wasn’t indicator enough.

Drive goes to all-4 wheels via the standard 8-speed tiptronic gearbox – equipped with D and S modes, as well as manual shift modes via steering mounted paddle-shifters.  As per the standard models, the standard torque split is a 40:60 front-to-rear setup, and there’s an optional sport differential which can apportion torque to the inside or outside wheel as a torque vectoring system.

Ride height is lowered by 20mm on the standard adaptive air suspension, and due to the Audi drive select the setup adapts itself to changing road conditions via driver selected drive modes.  Audi also offer the RS sport suspension with Dynamic Ride Control  as an option, as well as the variable ratio steering (don’t opt for that).  Both models are equipped as standard with 21-inch cast aluminium wheels shod with 285/30 profile rubber on the RS6 and 275/30 on the RS7.  Standard brakes are ventilated wave-design discs, with carbon-ceramic discs available optionally.

Visually, redesigned bumpers feature larger air inlets, with a revised rear diffuser.  The standard RS honeycomb grille and flared side sills are still there, but the front end now features a standard ‘quattro’ logo on the air inlet duct as well as add-on parts in a matte titanium finish.  There’s also a new metallic paint available as an option – Ascari Blue.

So, whilst VW is planning their next move to manage the fall-out from Dieselgate, Audi has just slapped BMW’s M5/6GC and Mercedes’ CLS/E63 AMG with an almighty wake-up call.  We’ll take the RS6 performance please, because if you’re going to embarrass a supercar, you might as well do it with the family and the dog onboard.