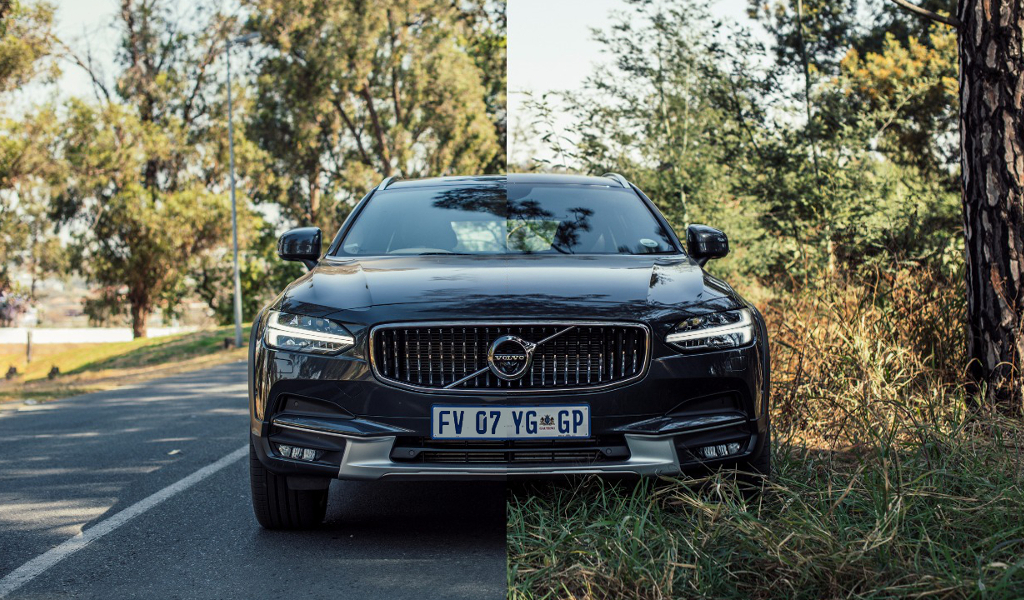 I grew up with a father who loved the idea of a Volvo station wagon.  Growing up in the mid 90s, I can only imagine the one he lusted after was the 850 T-5R estate, in Cream Yellow as they called it.  My late father never did own that Volvo station wagon or any other Volvo at all for that matter; but after spending a week with the new Volvo V90 Cross Country I was suddenly left with the same yearning for a Volvo wagon that he must’ve felt all those years ago…

Some may put it down to nostalgia – the idea of my father living on vicariously through my deeds – but the wanting is much more than mere sentiment.  I found myself wanting a Volvo V90 Cross Country for the simple reason that it may be one of the best cars money can buy today – the perfect car for anything and everything you’ll ever need to do, except maybe visiting the racetrack.

When recently testing the Volvo S90, I remarked that it may be one of the hardest cars I’ve had to fault.  But, it was still a sedan, which meant less luggage space than a comparable SUV, and a limited range of travel depending on the road surface available.  In V90 trim, a station wagon answers many of those questions – boasting absolutely huge luggage capacity of 560-litres.  It may not have a 3rd row of seats as in the XC90 – but we’ve remarked before that those seats are cramped and awkward to access, so it’s no real loss.

But station wagons don’t sell in South Africa, and so to fix that, Volvo gave the V90 its Cross Country treatment – raised suspension, all-wheel drive, and sufficient body cladding to not only make it look the part, but be semi capable off-road when a mere sedan or wagon would struggle.  Cross Country models bridge the gap between wagons and SUVs, making the former more appealing, whilst keeping their dynamically superior traits such as car-like handling, a low centre of gravity, and a lack of excessive size.

Helping the Volvo V90 Cross Country along in its conquest to lure buyers away from SUVs, Volvo hasn’t just lifted its suspension.  The V90 CC actually boasts a hybrid suspension setup that pinches componentry from the larger XC90.  It also features an off-road mode with hill descent control and reduced ABS intervention to make it more able to conquer any road.

But there is a downside to that – the ride quality takes a definite knock.  As I once remarked of the XC90, the low speed ride quality tended to be a bit lumpy.  In stark contrast, the S90 on 21-inch alloys was one of the smoothest rides I’ve ever experienced.  The standard V90 would be too – but the Cross Country’s hybrid suspension places it somewhere between the two when it comes to ride comfort, even with the optional air suspension – stiffer and more prone to picking up road deviations than the S90, but smoother, more refined, and more supportive than the XC90.

The bits it inherits from the S/V90 mean that it still has relatively capable handling characteristics.  There is mild body lean, but there’s a net of composure, even when you defy all logic and test the V90 Cross Country’s limits.

It’s not shy of being pushed, either.  In T6 AWD trim, the V90 Cross Country gets a 2.0-litre Drive-E motor with a twincharged setup – that’s a turbo and a supercharger working together.  Power outputs are 235kW and 400Nm – more than sufficient to see off many a junior hot hatch at the lights with a 6.3 second 0-100km/h sprint.  There’s an 8-speed automatic gearbox as standard – and though not as crisp as the ZF unit found in rival brand’s cars, it selects gears timeously and effects shifts swiftly.

The downsized engine yields some economy benefits, dropping average consumption to 9.2l/100km during a week of testing, but a diesel model – perhaps the D5 AWD – boasts vastly superior economy, with comparable torque.  That D5 would be my pick of the lot, and it’ll save you R50 000 on the price tag too.

Though capable, the Volvo V90 Cross Country isn’t one to thoroughly enjoy being pushed as a performance car.  Its true calling is as a lifestyle vehicle – not a posing, top down, compromised in all practicality lifestyle vehicle, but a particular vehicle for a particularly active lifestyle.  One with kids and mountain bikes and weekend hikes and dogs in the back and family holidays down the path less travelled.

To that end, the Volvo V90 is absolutely flawless – both inside and out.  Gorgeously styled, it can house the family and dogs in supreme comfort, with the bikes mounted on the back and a roof box to keep all the camping gear.  It’ll travel cross country too – covering thousands of kilometres in unrivalled comfort.

Inside, the by now familial Volvo 90-cluster design awaits, taking more from the S90 than the XC90.  For the most part, materials are of excellent quality, but one or two surfaces wear their harsh plastics a little too openly.  But it is a thoroughly enjoyable place to be – a comforting warm design matched with a plethora of available features.

The power adjustable seats with memory function, clad in soft Nappa leather, were optioned with heating (part of the R65 000 Premium Pack) and massage function.  The latter, a R5 500 option, is cheaper, and arguably more effective than importing your own Thai masseuse.  In addition to those magical seats, my test unit arrived with 4-zone climate control (R7 775), a panoramic sunroof (a R19 500 option that can quite easily be done without), rear window sunblinds (R2 850), heads-up display (R14 500), and an automatic cargo bay cover, retracting whenever the powered tailgate opened with a swipe of the leg under the rear bumper.

Another option equipped to the Volvo V90 Cross Country – Apple CarPlay and Android Auto integration at R4 000.  Apple fans will likely already know how well this system works to integrate your smartphone into the cars onboard infotainment systems – but Android users will be somewhat let down by the lack of local availability for the Android Auto app.  Acquire it by means other than Google’s Play Store, and you’ll be welcomed by a plethora of new functionality to make Volvo’s Sensus Connect even easier to use.

All in, with options, the Volvo V90 Cross Country gets a little pricey.  This particular Inscription model with the above mentioned options and a few more, tipped the pricing scales at R1 117 685 – up from a base price of R930 200.  But careful selection of engines and options can easily bring that down a fair bit, and the wealth of features on board makes it an incredible value for money proposition – relatively speaking.

Not only is the Volvo V90 Cross Country better looking than its XC90 sibling, but it’s easier to drive thanks to its lower centre of gravity and smaller dimensions.  It may be long, very long, but it’s wieldy and easy to manoeuvre.  The trend may be to buy large SUVs, but the V90 Cross Country challenges that notion with a truly best of both worlds concept.  It’s all-road ready, all the time, with the practicality of an SUV, and the comfort of a regular car.  Feature-laden and oozing with style and comfort, I’m tempted to call the Volvo V90 Cross Country the ultimate 1-car garage, and 95% of the ultimate 2-car setup.  It’s the complete package – the one car for every occasion.

It may not be the Volvo 850 T-5R estate, but the V90 Cross Country has taught me what my father saw in station wagons more than two decades ago.  So if you don’t mind, I think I’ll be searching for that T-5R in the classifieds now.