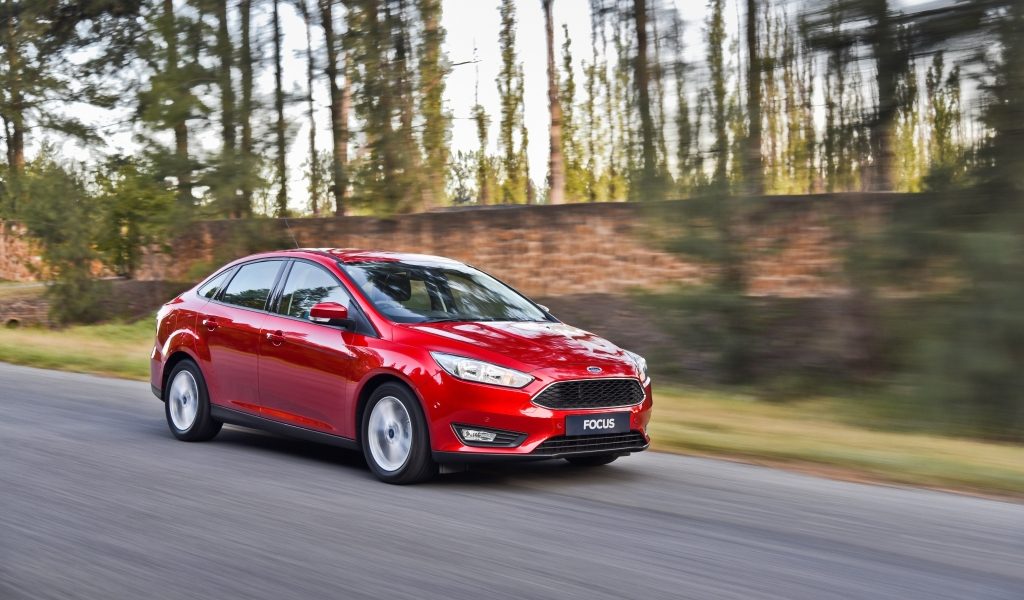 “Never judge a book by its cover,” my mother always taught me as a child, and like all mothers usually are, she was right to do so.  I should have remembered this simple lesson as I cast my gaze upon the silver Ford Focus sedan parked at my office this past week – which despite looking like a poverty spec model, was in fact the range topper, ST aside.

In Trend guise, the Ford Focus doesn’t exactly look like much.  Sure, it’s got all the upgrades of the newly face-lifted lineup, including slender lights and what not, but riding on the standard 16-inch alloys and wearing a demure silver paint job, the Focus hardly looks dapper.  It’s not ugly, not by any means, but it’s nothing eye-catching.

The interior is much the same – unassuming and a tad dreary.  The dash is made of soft touch materials, but it’s all shades of grey with not much to make it interesting.  Cloth upholstery and the lack of a leather steering wheel, paired with a dot matrix infotainment display, do little to improve the image – colour screens are offered with the additional Trend Driver Assistance package.

But beyond the drab appearance, the interior houses its fair share of features.  Standard kit includes Ford’s SYNC system with Bluetooth and voice control, MyKey, hill launch assist, auto-stop/start, drive-away locking, electric windows with front one-touch up and down, air conditioning, and cruise control with speed limiter.  It’s a fairly extensive list, and of course the Focus comes with a full complement of safety features including 6 airbags, ABS with EBD, and ESP – but some aspects leave something to be desired.  The SYNC system, for example, is slow to react to voice prompts and has intermittent trouble selecting Bluetooth audio streaming as a media source – frequently requiring voice commands to access it rather than the touch of a button.

Further beneath its skin, the Ford Focus has received a new batch of engines with the face lift.  In our test unit, a Fiesta ST-derived 1.5-litre EcoBoost engine – which is pegged to find its way into the Fiesta ST soon – does duty, driving the front wheels through a 6-speed manual transmission.  Outputs are on the impressive side of things from the 1.5-litre unit, plating up 132kW and 240Nm, the latter of which is available from as low down as 1600rpm, right through to 5000rpm.  Fuel consumption is not too shabby despite the potency on offer – 6.7l/100km being the figure I achieved over a week of testing.

Much like in its little brother from whom this engine is derived, the 1.5-litre mill is punchy and eager.  With the additional weight of the Ford Focus’ larger body (1334Kg), it doesn’t quite have the same urgency, and in-gear acceleration suffers a little, but from standstill it’ll still make the obligatory 0-100km/h sprint in a sprightly 8.8 seconds before topping out at 222km/h.  But where it lacks outright brutality, it more than makes up for it by zealously chasing the redline and providing much aural pleasure in doing so – for a force-fed motor, this is definitely one of the sweeter sounding ones around.

The 6-speed manual with which the engine is paired makes the package that much sweeter.  The short throw shifter switches between gears with precision and weight – notchy, but with a softness to the shift that makes it just sweet enough to be used daily without becoming overbearing.  There’s a great sense of mechanisation to the gearbox and the clutch, with a relatively short, even take of the pedal, and enough spring and steady bite to make the most of the engine without bogging down or lurching with every shift. Steering-wise, Ford’s onto a winner with this one – electronically assisted power steering is oft criticised for being devoid of feel and poorly weighted, and whilst the Focus may not provide the same communicativeness as a hydraulic system, it’s weighted perfectly and still provides great feedback and feel as to where the front wheels are.  It’s a system that’s been programmed well enough to be used for more than just navigating parking lots, too, as it offers quick changes of direction and instils confidence when chucking it through a set of curves.  The ability to rely on feedback to the driver and the linearity of turn in makes the Focus one of the sweetest driver’s cars in its segment.

The suspension is in on this too – wanting to impress on the daily commute as much as when the fun-bug strikes.  Dampers soak up undulations impressively, although still yielding some vibration through to the cabin, whilst firm springs ensure larger bumps and dips are dealt with without unsettling the ride too much.  Body roll is present, and quite a bit of it, but it eases into the drive linearly before tapering off as the tyres reach their grip limits – ensuring as a driver that you can back off before you get in too deep.  On the limits, the Focus is primarily set up for safety understeer, however the rear suspension is taught enough to offer some oversteer on lift off and when given a brief flick around a corner.

It’s a superbly buttoned down vehicle, this Ford Focus.  At all times it feels connected solidly with the road and driver, and every movement, change of direction, gear shift and prod of the brake pedal is met with an acute result that’s predictable, linear, and reliable.

I still maintain it looks too tame in standard trim, and the interior feels below par in base spec – but the Ford Focus 1.5T Trend reminded me of that childhood lesson to not judge a book by its cover.  Beneath the boring grey and unmemorable styling exists a car with some seriously solid driving attributes for those seeking a commuter with more that just a dab of fun.

Priced at R281 900 for the manual 1.5T Trend on test, the Focus is only a smidge more expensive than a comparably priced and specced, albeit less powerful, Chevrolet Cruze 1.4T, yet it offers far more for those who care about having fun behind the wheel.