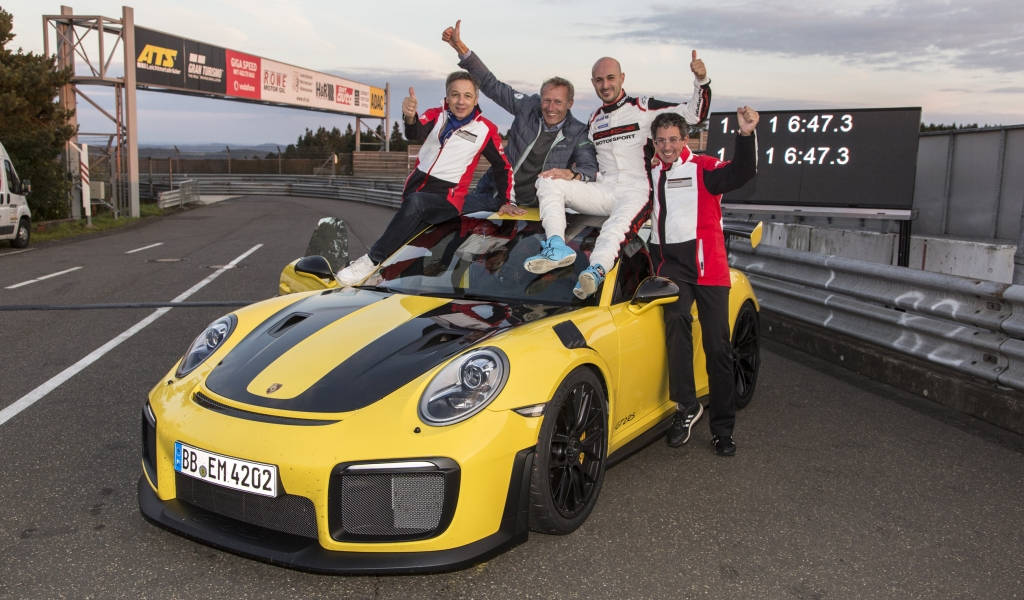 As we’ve said before, Nurburgring lap times are a bit of an un-regulated pissing contest.  Nevertheless, it’s always fun to see who can piss the highest, or in this case, lap the Nordschleife the quickest.  Today’s record-beating run?  Well that’s been set by Porsche in the new Porsche 911 GT2 RS.

Porsche previously held the Nurburgring production car lap record with the Porsche 918 Spyder, setting a time of 6 minutes, 57 seconds dead.  Of course in house siblings, Lamborghini, recently sent a Huracan Performante around in 6 minutes, 52.01 seconds to topple Porsche.  But today Porsche has announced that their uber-weapon, the Porsche 911 GT2 RS has smashed the production and rear wheel drive record with a time of 6 minutes, 47.3 seconds!

This smashes the Huracan Performante’s record by nearly 5 seconds, and is a full 17.7 seconds quicker than the time Porsche claims they were aiming for when they went out for the run.  Apparently, a 7 minutes 5 second run was all they were looking for at the start of the development process.

For the record itself, Porsche sent out two cars, one manned by Lars Kern from Germany, and the other by Nick Tandy from the UK.  Both drivers broke the Huracan Performante’s 6:52.01 on their first attempt, and subsequently each finished 5 laps, all below the 6:50 mark.  This consistency proves the Porsche 911 GT2 RS’s record lap time was not just a bit of coincidence or luck.

Tandy, a Porsche factory driver, travelled straight from a six hour endurance race in Austin, Texas to the Nurburgring, swapping from a Porsche 919 Hybrid to the GT2 RS.  However it was Kern who set the record time, a regular on the Nurburgring circuit as a competitor in the VLN Endurance Championship.  Over the 20.6 kilometre stretch, the Porsche 911 GT2 RS achieved an average speed of 184.11km/h.