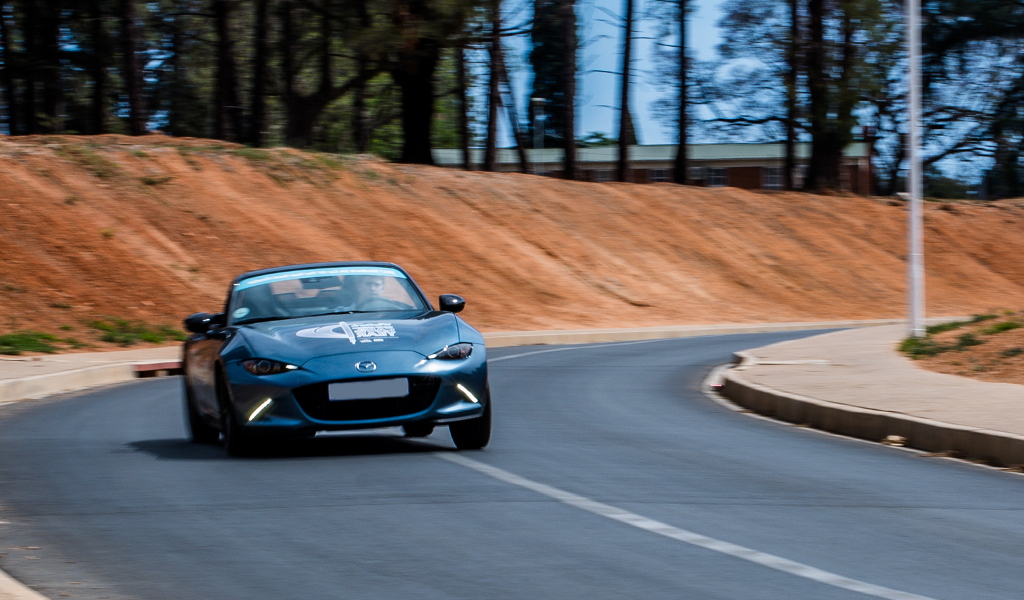 I started learning how to drive on the day of my 18th birthday, in the car that would eventually become my first – a 1998 Nissan Sentra 160 GSI.  Since that day, 7 odd years ago, I’ve driven hundreds more cars – some more powerful, some less.  I’ve had plenty attempts at hooliganism (some successful, some less so), and yet the day I really learnt how to drive arrived earlier this year, behind the wheel of the 4th generation (ND) Mazda MX-5.

I say ‘really learned how to drive’ in the sense that I learnt the intricacies behind handling a motor vehicle; nuances finer than merely operating a clutch, brake, and throttle pedal with a steering wheel and a gear shift lever.  No, really learning how to drive a car is more than that – it’s learning how to balance the weight of a car on corner entry, manage the shift as the centripetal force drags everything outwards, and balance throttle inputs to ensure smoothness rather than knee-jerk reactions that could see you eating a face full of tree.

Sitting in the driver’s seat of the Mazda MX-5 on a hot spring day, the manually operated soft-top stowed behind my head and the sweet smell of the Jacaranda blossoms in the air, I pitched the famously rear-wheel drive convertible into a corner… and understeered.

Surely this is not Jinba Ittai – the spirit of rider and horse as one; surely this isn’t the trait of the greatest selling sports car of all time?  But it is, and it was until I contemplated my actions more carefully and attempted the same manoeuvre once more.

I re-approached the corner, hard on the brakes to pin the front wheels down, tipped the steering wheel in, waited until I’d passed my clipping point, and eased on the throttle – not stomped.  With a brief heave as the weight shifted outwards, the Mazda MX-5 slingshotted out of the corner and settled once more on the straightaway, ready for the next attempt.

The Mazda MX-5 now has genuinely soft suspension – not a lot of travel, but soft enough to heave left and right, back and forth under braking, turning, and accelerating.  It’s because of this you need to drive it so particularly.  Jump on the throttle too early in a corner, and all the weight shifts to the rear axle, making the front end go light and push into understeer.

Similarly though, keep the weight over the front wheels, chuck it into a corner, and the rear end is light enough to twitch away at the limits of grip.  Don’t expect smoky drifts though – the Mazda MX-5’s meagre 118kW and 200Nm outputs from the naturally aspirated 2-litre are hardly enough to induce power oversteer.  For true oversteer you need speed, and you need to unsettle the rear end with a good solid flick.

The soft suspension also means through corners, particularly on initial turn in, the Mazda MX-5 heaves across to one side.  It’s more than just a bit of body roll – it’s quite wallowy.  If it weren’t for the minimal suspension travel it would be downright unpleasant.  But as it stands, it aids the goal of a pure driving machine.  The potential for it to suddenly heave means you enter every corner with precision – the Mazda MX-5 rewarding smooth, measured inputs with gleeful cornering ability.

You can really wring it out – but never to a full ten tenths point of grabbing it by the scruff of the neck and flinging it about.  It’s too soft for that; too unsettled by vicious driving, and too painful on the driver to do so on a regular basis.

Sitting in that low slung pilot’s seat, my legs point towards the right hand side headlight.  The narrow width of the Mazda MX-5 and the necessity to house a transmission running the length of the car means that interior space is a bit cramped.  With this position unavoidable, flinging the MX-5 around tends to result in bruised knees from being constantly flung into the transmission tunnel.

It’s a bit awkward for tall drivers, not least because the driver’s seat only has a very limited amount of travel.  Even positioned as far rearward as possible my knees are still crunched up a bit too high with my 1.8m length frame.  That aside, the steering wheel placement is superb, but in the effort to cut weight (every milligram matters in a Mazda MX-5), it’s only height adjustable – once again making it a touch awkward on taller drivers.

Sitting there, pointed off to one side, with my knees hunched, and the wheel firmly in hand, it’s not difficult to see where Mazda employed their ‘gram strategy’ most (shaving off milligrams from every item to reduce the overall weight).  The rear-view mirror’s plastic housing has been reduced to a sliver – and as such vibrates and blurs rearward visibility at more than 60km/h.

The sun visors look to have been sheared in half – concave plastic plates with a single flap for a vanity mirror.  Other plastic trim bits also seem to have gone on a diet, and the soft-top roof is devoid of any electronic operation at all.  Yet strangely enough, Mazda have given the Mazda MX-5 heated seats as standard fare.  Because shaving off milligrams everywhere for performance goes hand in hand with a toasty backside – apparently.

Truth told, I’m not really sure the weight ‘savings’ make much of a difference – nothing that wouldn’t be offset by a few grocery bags anyway.

But it’s not like the Mazda MX-5 is crying out for more performance.  It already weighs a flimsy 1075kg, and the torque-to-weight figure is already healthier than a Toyota 86.  It’s no wonder then that it’ll outsprint the Toyobaru, with a claimed 0-100km/h time of 7.3 seconds.  It’s no doubt slower at altitude, and yet still it feels incredibly punchy.

The drivetrain has a raw, mechanical feel to it too.  A pleasing trait in a world full of anaesthetised simulator-like drives.  Winding up the engine to the 6000rpm mark on the tach and you can feel the power surging rearwards right alongside you.  There’s a deep growl to the engine note that accompanies the surge, and as the revs climb, so too does the noise.  But it cuts short as you reach the relatively low rev-ceiling at just past 6000rpm – and I can’t help but wish Mazda had given the 2.0-litre motor a bit more freedom to rev out beyond that by another 1000.  If a Swift Sport can do it, surely the Mazda MX-5 can too?

As the revs climb, the gear shift lever vibrates in your grip; and as you jab the clutch – with a shorter action than your drunken Uncle Fred’s temper – and bang it from one gear to the next, the incredibly short shift action is immensely pleasing.

There’s a proper notchiness to it – a click-click between the gears, but with none of the stickiness that often accompanies such mechanical shifts.  It feels just refined enough to be comfortable, but raw enough to leave you feeling just slightly primal – a thick medium-rare steak of a shift.  It’s delightful.

That raw edginess is what makes the ND Mazda MX-5 so much fun.  The sharper styling of the current generation matches the sharper attitude, and carves itself out as a proper driver’s car rather than a ‘hairdresser’s car’ as it has so long been known.

Sharp throttle responses from a naturally aspirated engine; solid, mechanical feeling movements; sharp, direct steering with wholesome feel – they’re all the makings of something truly great.  Throw in the balance of a front-engined and rear-wheel driven lightweight chassis and the Mazda MX-5 just makes so much sense.

The suspension is a bit of a disappointment – the springs should’ve been just a touch firmer to make it an all out attack type of car – but for the everyday driver looking for thrills, and looking for something that ultimately teaches you the finest details of how to manage and drive a car properly – this is as good as it gets.  This is just about perfect.

It took me seven years and more than 200 cars – but I finally learnt how to drive.  I had a great teacher, the Mazda MX-5, but even though it’s gone now, I still feel there’s more to be learned.  It’s that type of car; the one that teaches you something new every time you go for a quick spin, the one that leaves a lasting impression, despite its simplicity and lack of power.  Now I just need to find that pesky R441 700 to afford one…