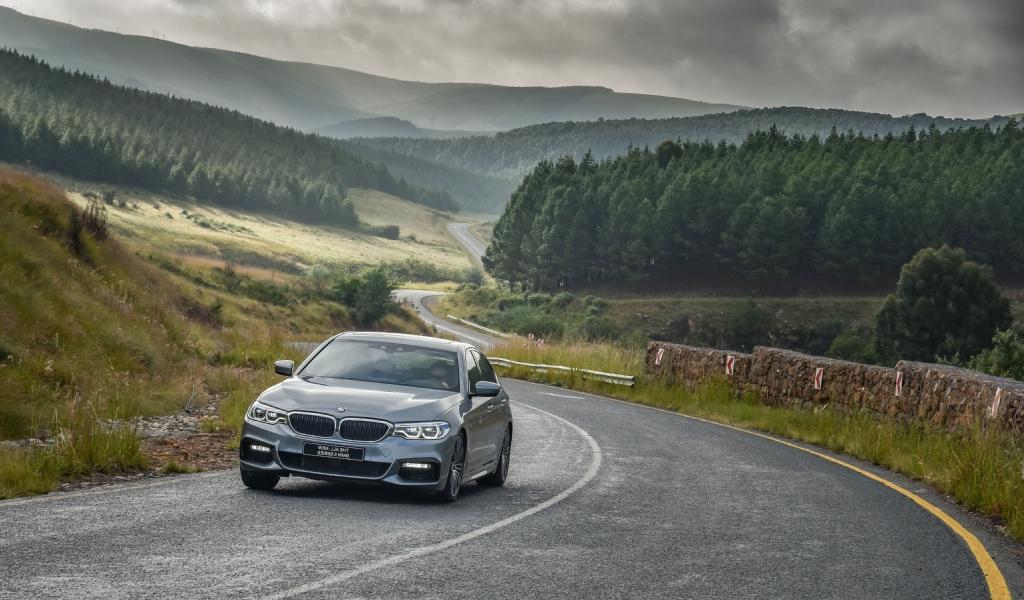 The weather is clear, and it’s a fine coastal day in the town of George, South Africa.  Before me sit an assortment of new G30 BMW 5 Series models – the 7th generation of BMW’s business sedan – ranging from the entry level 520d to the, for South Africa anyway, range-topping 540i.  The urge is overwhelming to take the quickest of the lot, especially knowing Outeniqua Pass is around the corner (there’s a video of that coming soon), but I fight that urge and instead hop into the one that strikes the finest balance between practicality and performance – the BMW 530d.

BMW engineers have jumped on board with modular platforms now, and the G30 BMW 5 Series shares a common architecture with the latest generation 7 Series.  However, due to the larger sales numbers and the cheaper price, the 5 Series does without the carbon core technology.  Instead, BMW have utilised high tensile steel, aluminium and magnesium to reduce the 5 Series’ weight by an average of 100Kg over the outgoing model.

Less weight and a range of new engines is good news – but adding further improvements, BMW has made available the option of 4-wheel steering for the first time.  At low speeds the rear wheels turn in the opposite direction to the front wheels to reduce the turning circle, whilst at higher speeds the rear wheels turn in the same direction as the front pair to increase stability and agility.

Unfortunately, the rear wheel steering box was left un-ticked when speccing this particular 530d.  However, there’s good news in the way that it isn’t a necessity to ensure the G30 BMW 5 Series is the sweetest handling 5er we’ve seen in a long time.

The old model was oft accused of being bloated, overweight, and under endowed to handle itself correctly – not that it was a poor handler, just that it wasn’t as sweet as it could’ve been.  Shorn of 100Kg of excess weight, the new model is a drastic improvement.

No longer cumbersome, it shrinks around the driver – always a good trait – and feels lithe and athletic.  The suspension is supple yet responsive, allowing for small amounts of telegraphic lean before tapering at the limits.

Approach those limits and the BMW 5 Series responds with neutrality.  It’s perhaps not as neutral as a Jaguar XF, but it’s as close as, and in arguably a far more rounded package.  There are whiffs of understeer to be found – but you’re only going to sniff those out at fairly ludicrous speeds.  Importantly, the predominant trait is just a tease of oversteer, little twitches as the rear rubber dances at the limits of adhesion.  Those limits are massive though, and the BMW 5 Series’ grip levels border on the unbelievable for a RWD car of its size.

Opt for the rear-wheel steering and you won’t be disappointed.  The additional R23 400 is well worth it if you’ll be actively seeking out mountain passes or race tracks, and completely transforms the 5 Series into a serious sports sedan.

Previously a tender point for BMW, the electronic power steering system is now a glowing plus.  It may not drip with the feedback of a hydraulic setup, but it feels natural, there is some feel – real or not, it’s too close to call – and there’s none of that syrupy stickiness around the centre-point.

As has been the norm for BMW in recent years, the 5 Series features the ZF 8-speed automatic gearbox as standard across all models.  All models are also only rear-wheel drive – South Africa misses out on the M550i xDrive.  As always, the gearbox is sublime – smooth when in Comfort mode and sharp when in Sport mode.  It’s still the best traditional automatic gearbox on the market.

The BMW 5 Series features a wealth of trickle-down tech from the 7 Series.  More than just sharing a chassis, sans carbon, there’s a whole bunch of trickery that can be opted for to give your 5er the 7 feel.

Features such as gesture control are now available, as well as the BMW Display Key – which displays a wealth of information and allows drivers to find their car, check fuel levels, pre-prime the climate control, and even – as another option – remote control park the BMW 5 Series if it would be too tight to exit the car once parked manually.  The key can be charged by the standard for SA wireless charging pad in the centre console.

The iDrive system now features a reworked GUI (Graphic User Interface) and is now able to receive inputs via either rotary controller or touch screen.  Updated voice recognition is welcome, which now has greater tolerance for varying accents and languages.

BMW’s Concierge Service is also available, along with a whole load of connected abilities through BMW Connected Drive.  But drivers benefit most from new optional extras, including a redeveloped heads-up display and a host of semi-autonomous technologies to rival the likes of the Volvo S90 and Mercedes-Benz E Class.

Steering and Lane Control Assistant is available at speeds up to 210km/h when lane markings are clearly visible, which pairs up with Adaptive Cruise Control.  Unfortunately South Africa doesn’t receive the Lane Change Assistant.