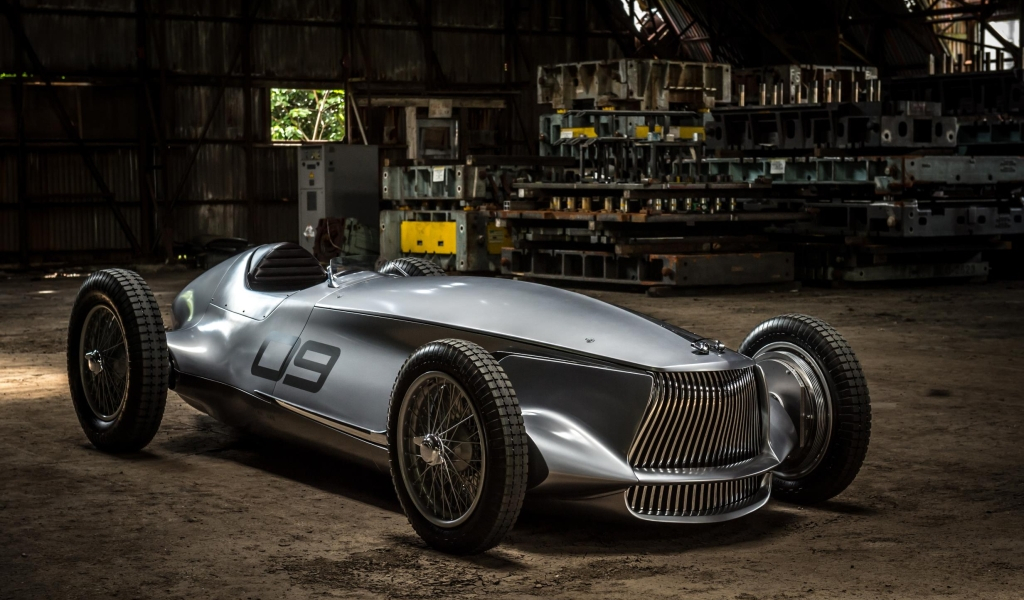 It looks like something from British marquee, Morgan, but this retro looking single seater racecar is actually the work of Nissan’s luxury arm, Infiniti.  The Infiniti Prototype 9 is the end product of a question; what if Infiniti created a Grand Prix racecar in the 1940s?

But the Infiniti Prototype 9 is more than just styled in a 1940s manner; it’s been built with time-honoured production techniques, including use of wooden moulds to create the hand-beaten panels.

According to Roland Krueger, Chairman and Global President of Infiniti, the Prototype 9 “started as an after-hours idea.”  The engineers and designers “volunteered their own time, more and more staff became involved.  Our teams have proven skills in manufacturing, engineering, design and advanced powertrains, yet they wanted to bring their own traditional craftsmanship to the project.  They made Prototype 9 a reality, a result of their ingenuity.

Not wanting the Infiniti Prototype 9 to be just homage to the past, the engineers imbued it with a futuristic drivetrain.  The Prototype 9, therefore, is driven by electric power, courtesy of Nissan’s Advanced Powertrain Department.

The prototype drivetrain comprises a 30kWh high voltage battery and a prototype electric motor not yet seen in production.  The motor outputs 120kW and 320Nm, driving the rear wheels via a single-speed transmission.  Due to this, the top speed is relatively low at just 170km/h, but the 0-100km/h sprint is sprightly at 5.5 seconds.  Electric range for the Prototype 9 has been defined as “20 minutes under heavy track use.”

The lightweight Infiniti Prototype 9 (‘9’ in pronounced Kyuu like “Q” in Japanese) is built on a steel ladder frame, and weighs just 890kg.

The design of the Infiniti Prototype 9 originates from Alfonso Albaisa, Senior Vice President of Global Design at Infiniti.  He started with a mere sketch, after which designers at Infiniti’s design studio in Atsugi, Japan started making their own contributions.

The retro design cues are paired with current Infiniti design language, with this ethos continuing to the high quality interior layout.

The Infiniti Prototype 9 is on display at the 2017 Pebble Beach Concours d’Elegance, alongside the original Prince R380 racecar that took the victory at the 1966 Japanese Grand Prix at Fuji Speedway.  The R380 on display is believed to be the only surviving R380 in the world.